How does the brain represent the external world? The prevailing view is that specific brain regions perform specialized functions, such as encoding what we see or hear, and these regions interact to produce our holistic sense of experience. Although this view is strongly supported by experimental evidence, there’s a catch: due to technological constraints, most neuroscience experiments focus on parts of the brain that are closest to the external world, not those deep within the brain, offering a skewed picture of how the whole brain represents information. New research from the lab of Princeton Neuroscience Institute Professor Mala Murthy, published in January in Nature Neuroscience, takes a look at the whole brain of fruit flies and finds that this predominant view is only part of the full picture.

The study, led by Postdoctoral Research Associate Diego A. Pacheco, focused on understanding how sounds with great social significance are encoded throughout the entire brain of the fruit fly, Drosophila melanogaster. To do this, Pacheco had to grapple with a fundamental technical challenge: how can one examine brain activity that is both detailed, at the resolution of neurons, and expansive? To overcome this hurdle, Pacheco imaged throughout the brain at a detailed level using fluorescent dyes, and in collaboration with Eftychios Pnevmatikakis, a research scientist at the Center for Computational Mathematics at the Simons Foundation, developed a novel pipeline for combining these sequential observations into a unified atlas of brain activity, like putting together a puzzle.

Armed with this atlas, Pacheco and Murthy were able take a deeper look than anyone has before at what brain regions respond to behaviorally important sounds. Their findings diverged greatly from the prevailing view — they found auditory responses deep within the brain, including within areas that were known to perform functions wildly unrelated to hearing, such as processing smells and orienting the body during movement. Additionally, Pacheco’s common atlas allowed the researchers to compare brain activity within flies that experienced the same sound multiple times and between different flies, comparisons never before considered. They found that brain activity was similar for multiple sound exposures within individual flies and across different flies for the brain regions that initially process sounds, but that this similarity goes away for deeper brain regions, the very same regions they recently discovered were responsive to sounds in the first place.

These findings offer the first real glimpse at the diversity and expansiveness of auditory neural encoding in the fly brain and how these neural responses vary across individuals. Perhaps more importantly however, Pacheco’s method was the first critical step in the creation of a common reference frame for fly brain activity, enabling future research that depends on the ability to make comparisons across related datasets. “Diego's method allows us not only to compare across trials within a brain, but across individuals, and across sexes —a major advance,” says Murthy. “Now, we're expanding on it, registering data sets between different labs, different types of sensory activity, for example visual versus auditory, and different behavioral paradigms, setting a standard for how neural activity should be related such that meaningful comparisons can be made across data sets.”

Likewise Pacheco’s scientific discoveries have sparked exciting new hypotheses in the Murthy lab that they are eager to test. “My view now is that there's more interesting multi-sensory computations happening in a variety of brain regions,” says Murthy. “We have systems in the lab to look at, for example, combined auditory and visual stimuli, and how these brain areas are representing those signals together. ”

Pacheco, a native of Peru, received his undergraduate degree in genetics from the Universidad Nacional Mayor de San Marcos and completed his PhD at the Princeton Neuroscience Institute in 2018. He will soon depart Princeton for a postdoctoral position with Professor Rachel Wilson at Harvard University. Although Pacheco is moving on, he has undoubtedly left his mark. “Diego’s work has set the stage for new science that we wouldn't have done otherwise,” says Murthy. “Registering maps of auditory activity with maps of responses to other sensory stimuli (for example, visual, olfactory, etc.) make it possible to find substrates for interesting multi-sensory activity, where responses to different sensory stimuli overlap.” 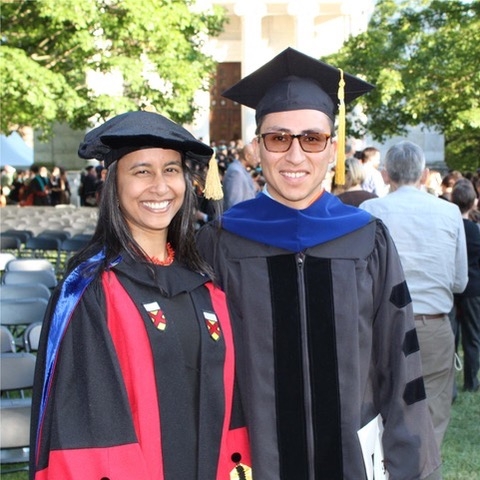 Location of neural activity sensitive to sounds (colored regions) compared to anatomical markers (contours), while moving from the front to the back of the fly brain (all neural activity is mapped to the right hemisphere).