Imagine you’re following directions to drive to a friend’s house: At the 3rd traffic light, take a right. To do this, you must keep in mind two pieces of information: your ongoing physical location — to ensure that you stay on the correct side of the road for example — and the number of traffic lights you’ve seen. How does your brain simultaneously organize and combine these two important signals for guiding your behavior?

New research from the labs of Princeton Neuroscience Institute Professors David Tank and Carlos Brody published this summer in Nature combines advanced technologies for studying the neural basis of behavior with advanced mathematical analysis techniques to provide an answer. The study, titled Geometry of abstract learned knowledge in the hippocampus, was jointly led by PNI Postdoctoral Research Associates Edward Nieh and Manuel Schottdorf.

To understand the mental processes that underlie this ability, Nieh and Schottdorf trained mice to navigate a maze to receive a reward and observed the activity in the animals’ brain while they did it. A series of cues were displayed to the mouse as it ran the maze and it had to ‘count’ them to determine the location of the reward. A greater number of cues to the left indicated a greater amount of ‘evidence’ that the reward was at the left end of the maze, and vice versa for a greater number of right cues.

Critically, the mouse navigated the maze in virtual reality: as it walked on a specially designed treadmill, an image of the maze projected around it like an IMAX movie moved, creating the illusion, from the perspective of the mouse, that it was moving. Because the mouse was not actually moving, the setup allowed the researchers unprecedented access to the animal’s brain. The researchers used microscopes to image the activity of the animals’ neurons while they navigated through the virtual world, collecting data from hundreds of neurons simultaneously. 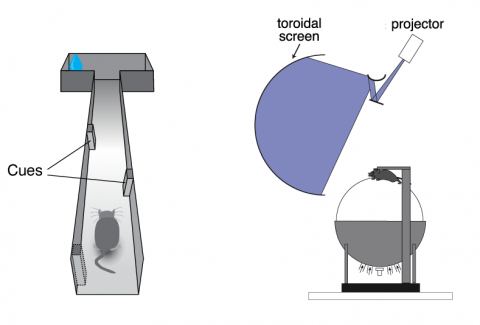 The researchers focused on a part of the brain called the hippocampus, a seahorse shaped structure that has long been implicated in memory and navigation. However, recently the hippocampus has been shown to encode non-navigational cues that are critical for performing cognitive tasks, suggesting that the hippocampus might provide the substrate for combining navigational and cognitive information to guide behavior. Nieh and Schottdorf sought to understand if neurons in this region represented the cue-based evidence for a left or right choice in addition to the animal’s location in space, and if they did, what the underlying principles governing the organization of this information were.

“We wanted to push the boundaries a bit and study how the hippocampus combines multiple variables when making difficult decisions,” says Nieh. “If you think about your most vivid memories, they're generally filled with different sensory details and emotion. You probably remember where you were, but also the smell of the air and whether you were happy or sad.”

They considered two possible scenarios. If the cells in the hippocampus only responded to the animal’s location, as they have long been known to, individual neurons would respond in a similar way on different runs of the maze for which the evidence differed. On the other hand, if these cells simultaneously encoded both the animal’s location and the amount of evidence it experienced, each neuron should have an idiosyncratic response to a unique combination of these variables and the collection of all responses should encode all possible combinations of the variables. When the researchers visually inspected the collective responses of the neurons they found clear support for the latter scenario, with each neuron responding to a unique combination of location and evidence.

“This was the first piece of evidence that we were on to something exciting,” says Nieh. “We were surprised to see that it wasn’t separate populations of hippocampal neurons that encoded place or evidence, but rather most neurons appeared to encode both of these variables.” 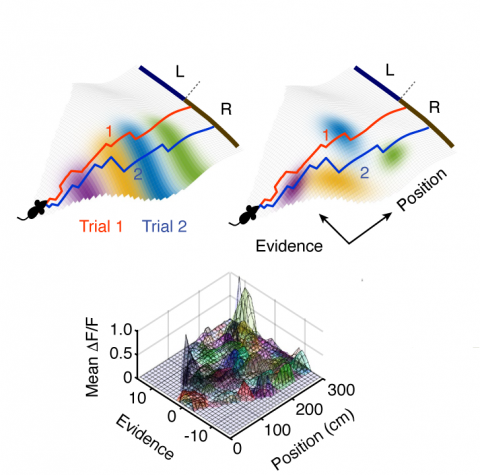 The intricate way these two signals were represented in the coordinated activity of the neurons suggested to Nieh and Schottdorf that they should dig further into the underlying logic of this representation. To do so, they applied a recently-developed mathematical algorithm that allowed them to reduce the activity of hundreds of neural recordings to just a few coordinates, or dimensions. Importantly, this handful of dimensions could account for the majority of neural responses; in other words, although the researchers observed hundreds of neurons, hidden ‘within’ this neural activity was a small number of simpler variables that could account for almost all of the neurons’ activity and hopefully, also be related to the animal’s behavior.

The algorithm, called Manifold inference from neural dynamics or MIND, was developed by former PNI graduate student Ryan Low and former PNI postdoctoral researcher Sam Lewallen. Although many mathematical approaches, called ‘dimensionality reduction methods’, exist for reducing neural responses to a smaller number of variables, MIND is unique in that it can identify the ‘natural’ coordinate system —  technically referred to as a manifold — along which these variables are represented. For example, if a hypothetical ‘mental variable’, such as evidence, was represented along a curved line, where points on that curved line corresponded to unique combinations of active neurons that are constructing the animal’s mental representation of evidence, MIND would be able to search through the neural activity to find this curve. In contrast, other methods can only identify the smallest volume defined by straight lines in which this curve is contained. By finding this natural coordinate system, MIND is able to identify an extremely small number of variables which can describe all of the neural responses. 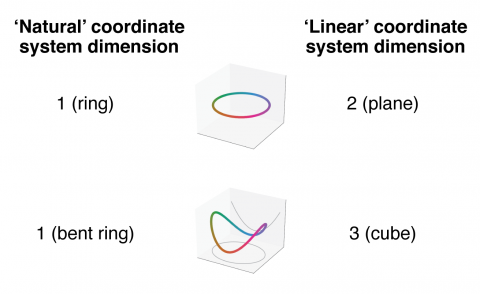 Using the MIND algorithm, Nieh and Schottdorf were able to identify a simple manifold that accounted for the majority of the neural responses — only four to six dimensions were required to describe almost all of the neural activity, in contrast to other methods which required dozens of dimensions. These results confirm that although the neural response of the hippocampus can be succinctly summarized by a small number of variables, the shape of the geometric object that these variables construct is intricate and it requires more sophisticated mathematical tools, like MIND, to identify it. 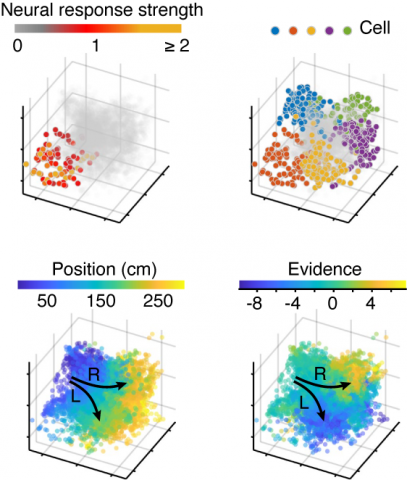 Once they identified the manifold using MIND, a rich structure about how the neurons collectively organize task-related information could be gleaned. The response of each neuron was localized to a compact region of the manifold, but collectively their activity tiled the entire structure, indicating that their coordinated activity constructed the manifold, yielding an organized cognitive map for guiding behavior. Furthermore, although the manifold was not identified using any information related to the animal’s behavior, such as location or evidence, movement along the manifold accurately reflected these variables, indicating that not only did the manifold coordinate system account for the neural data, it was also aligned with important behavioral variables related to the task. This second finding further bolstered the hypothesis that the manifold constituted a cognitive map, constructed by the neural response, that was used to guide the animal’s behavior.

The identification of this cognitive map in the hippocampus is a huge step forward in neuroscience researchers' efforts to understand the most primitive logic of how the brain organizes task-related information. “Our work in mice can only provide a part to this puzzle. But taken together with research in humans, for example Meir Meshulam's work here at PNI, there seems to be an emerging common theme: similar patterns of neuronal activity reflect a shared understanding of latent structure in the world,” says Schottdorf.

Collectively, these findings provide an impressive glimpse into the ordered way in which the brain organizes complex information. “Although the brain may seem too complex to understand, with the right mathematical tools we can tease simplicity out of this complexity,” says Schottdorf.