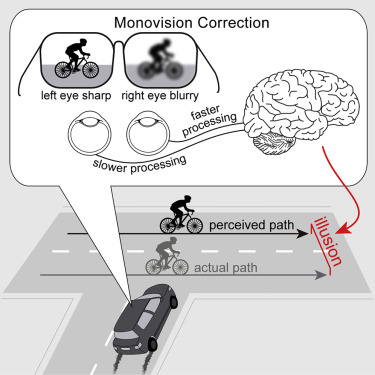 Monovision is a common prescription lens correction for presbyopia. Each eye is corrected for a different distance, causing one image to be blurrier than the other. Millions of people have monovision corrections, but little is known about how interocular blur differences affect motion perception. Here, we report that blur differences cause a previously unknown motion illusion that makes people dramatically misperceive the distance and three-dimensional direction of moving objects. The effect occurs because the blurry and sharp images are processed at different speeds. For moving objects, the mismatch in processing speed causes a neural disparity, which results in the misperceptions. A variant of a 100-year-old stereo-motion phenomenon called the Pulfrich effect [2], the illusion poses an apparent paradox: blur reduces contrast, and contrast reductions are known to cause neural processing delays, but our results indicate that blurry images are processed milliseconds more quickly. We resolve the paradox with known properties of the early visual system, show that the misperceptions can be severe enough to impact public safety, and demonstrate that the misperceptions can be eliminated with novel combinations of noninvasive ophthalmic interventions. The fact that substantial perceptual errors are caused by millisecond differences in processing speed highlights the exquisite temporal calibration required for accurate perceptual estimation. The fact that these misperceptions are rare under indicates how well the visual system is calibrated under normal circumstances. The motion illusion—the reverse Pulfrich effect—and the paradigm we use to measure it should help reveal how optical and image properties impact temporal processing, an important but understudied issue in vision and visual neuroscience. Ongoing and future work on a range of related topics with clinical and scientific import will be discussed.