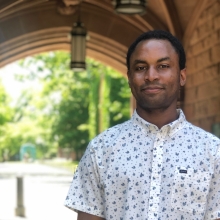 Jamal Williams, a PhD candidate in Dr. Kenneth Norman’s laboratory, has been awarded the prestigious D-SPAN award from the National Institutes of Health. The goal of this award is to support outstanding graduate students from diverse and underrepresented backgrounds in neuroscience through graduate and postdoctoral research. In addition to financial support, the award also provides opportunities for those wishing to become independent researchers in the future. These benefits include attendance at an annual meeting held by NIH and DSPAN and career development resources for the eventual transition from postdoc to faculty member. Awardees receive six years of support, including two years of graduate research in the F99 phase and four years of postdoctoral research in the K00 phase of the award.

Jamal decided that he wanted to become a scientist as an undergraduate student at the University of Memphis, where he was working with intelligent tutoring systems (ITSs) and music to understand learning patterns in humans. Jamal joined the Princeton Computational Memory Lab as a graduate student in 2015 after serving as a research assistant in the lab for two years. His research uses neuroimaging and computational modeling to investigate the role of music in higher-order cognitive processing. During the F99 phase of the award, Jamal will use fMRI to investigate how repeated musical themes in a film score shape a viewer’s memory for the film. Unfortunately, the COVID-19 pandemic has slowed all research involving human subjects, but Jamal states that he has a manuscript in preparation and collected data prior to the research halt, which he will analyze until human research can resume safely.

During the postdoc K00 phase of the award, Jamal plans to continue this same line of research. He states that he will broaden his approach not just to music but also to the role of language in higher-order cognitive processing. In addition, he proposes to expand his research across the developmental timespan and across cultures. Finally, he plans to expand his methodology by incorporating EEG and MEG, as well as developing novel research methods for investigating music processing in the brain.