SARS-CoV-2 infection may lead to Coronavirus Disease 19 (COVID19), which can severely hamper the function of a patient’s lungs and require that the patient utilize a medical device to help them respirate. One such device to help patients effectively respirate is a ventilator: a mechanical device invented more than 150 years ago that mechanically controls air pressure and flow to a patient. In addition to patients suffering from COVID19, ventilators are used in a wide array of medical interventions, including general anesthesia.

While modern day ventilators save patient’s lives, they are expensive and require extensive training for proper use. Not only do settings, such as target air pressure or air volume provided, need to be properly calibrated to each patient, but these settings may change for an individual patient over time. If ventilators are not accurately attuned to the specific patient, a ventilator may actually cause harm to the patient’s lungs.

Two groups of Princeton researchers, led by Daniel Cohen and Elad Hazan, set out to improve these two issues with ventilator use. Daniel Cohen’s group at Princeton, spearheaded by Julienne LaChance, along with Dr. Daniel Notterman, Manuel Schottdorf and Grant Wallace from the Princeton Neuroscience Institute, Zhenyu Song, Tom Zajdel and Sophie Dvali, first designed a more cost-effective and rapidly deployable ventilator that can be assembled using build instructions from replaceable “off-the-shelf” parts. This effort was an inter-disciplinary effort, including researchers from computer science, neuroscience, physics, and mechanical and aerospace engineering. This project also included collaborators from other institutions across the nation, including Chase Marshall, Rengo Seirup, Moritz Kutt, and Jonny Saunders. After some revisions to the initial prototype, the newly designed ventilator can be assembled for a fraction of the cost of existing ventilators, utilizes open-sourced software and possesses the necessary technical specifications for use in hospitals, including alarms and connectors to existing hospital ports. Importantly the entire design is open sourced and well documented, allowing anyone to build a prototype ventilator in a few days. Although not yet approved, the design has been tested at the Cleveland Clinic, meets standards set forth by the FDA and has been peer reviewed. This ventilator is called PVP1, or the People’s Ventilator Project. 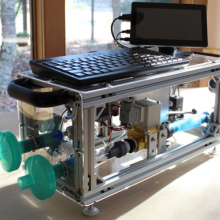 After the PVP1 team had designed a novel cost-effective ventilator, Elad Hazan’s group along with Google, sought to use artificial intelligence to monitor and calibrate ventilator settings during patient use, eliminating the need for experts to constantly monitor the device. Similar to how the PVP1 could lead to ventilator use in regions that cannot afford costly ventilators, the Hazan group’s novel control software could lead to a possible expansion of ventilator use to regions that cannot provide individuals with such technical training. To accomplish this task, Hazan’s team, which included researchers Daniel Suo, Naman Agarwal, Wenhan Xia, Xinyi Chen, Udaya Ghai, Alexander Yu, Paula Gradu, Karan Singh, Cyril Zhang, Edgar Minasyan, Julienne LaChance, Tom Zajdel and Manuel Schottdorf, aimed to design a method of monitoring ventilator settings using a deep-learning approach.

Most ventilators, including PVP1, are run by an algorithm, called PID (Proportional, Integral, Differential), that has been in use since the early 1900’s. “Proportional” measures the deviation between the desired and measured pressure; “Integral” is the sum of past deviations and “Differential” is the difference between the past two deviations. A linear combination of these three terms allows the ventilator to precisely and rapidly adjust pressure to a target value. By updating and improving the automated control of ventilators through neural networks, ventilator use may not only become more efficient, but may also reduce potential harm to a patient’s lungs, thus becoming a safer intervention. This software and ventilator design is now being used for research purposes.

This novel ventilator and control software is not the only contribution that Princeton researchers have made throughout the COVID19 pandemic. Research groups have supplied personal protective equipment (PPE) to local hospitals, researchers in the Physics Department have designed a commercially available ventilator called the Mechanical Ventilator Milano (MVM), and Andrew Leifer and David Tank in the Princeton Neuroscience Institute have contributed to the design of a multi-patient helmet ventilation system for non-invasive ventilation. While vaccines and post-infection interventions, such as anti-viral medications, have helped ease the pressure off of intensive care units and ventilator demand, these novel ventilators and other Princeton contributions can have impacts beyond COVID19.

In addition to directly contributing to the development of smart, more precise, and personalized ventilation systems, these inventions add momentum towards more open-sourced medical instrumentation which can enable faster device innovation, lower costs, facilitate external review and inspection, and provide benchmarks for future innovation here at Princeton and around the world.