Chris Zimmerman has received three prestigious awards for his PhD research at the University of California, San Francisco. Zimmerman is currently a Helen Hay Whitney Foundation postdoctoral research fellow in the Princeton Neuroscience Institute in the lab of Ilana Witten. 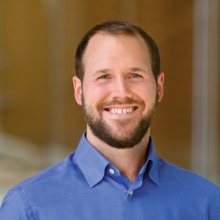 The first, the Eppendorf & Science Prize for Neurobiology, is awarded annually to a single young investigator in neurobiology. The winner is in part selected based on a 1,000-word entrance essay summarizing their work, which is then published in Science Magazine. It also comes with a $25,000 check. The second, the Donald B. Lindsley Prize in Behavioral Neuroscience, is awarded by the Society for Neuroscience (SfN) and the Grass Foundation to one or two PhD students each year, for outstanding thesis research in behavioral neuroscience. The committees to choose the winners of both prizes are composed of members of SfN, the field’s largest professional society. In addition to these recent awards, earlier this year Zimmerman received the Harold M. Weintraub Graduate Student Award, which recognizes outstanding achievement in graduate studies in the biological sciences, from the Fred Hutchinson Cancer Research Center.

Zimmerman’s research, both currently and during his PhD, focuses on a lesser studied research paradigm in behavioral neuroscience: how signals generated within the body influence behavior. “Decades of neuroscience research have taught us how external sensory signals — like sights, smells, sounds — influence our actions both innately and through learning, but we're only beginning to discover the relevant signals that come from inside the body and to understand how they shape our behavior, ” says Zimmerman.

Zimmerman’s award-winning PhD research focused on the neural systems that underlie our sense of thirst. Prior research identified brain regions that underlie this sense, and researchers even had a basic model of how it worked. “The brain’s thirst system is designed to maintain the volume and osmolarity of our blood within a narrow range. [The established model] for how this system functions is based on simple negative feedback,” says Zimmerman, referring to the process by which a system will adjust itself when some signal has deviated from a desired value, just as a thermostat does for temperature. “There's an error detector in the brain that triggers thirst when hydration signals in the blood deviate from their setpoints. Feel thirsty, drink, correct the signals.”

However something seemed off with this basic model. By watching animals and humans, researchers knew that most drinking behavior is regulated too rapidly to be explained by negative feedback. “If you're thirsty and you drink water, that water will quench your thirst immediately even though it won't enter the bloodstream, and correct the error signal, for tens of minutes,” says Zimmerman. “So it's clear that something is missing from our understanding of the thirst system.” Zimmerman’s disbelief in this commonly-held model was increased further because no one had actually ever recorded the activity of the cells that were supposed to perform this computation; prior work had hypothesized this model, and determined the brain regions that could implement it, based only on a combination of behavioral experiments and examining postmortem tissue samples of the animals in those experiments.

Using microscopes that can image deep structures in the brain, Zimmerman took a look at what the neurons in these brain structures were actually doing when mice drank. He was surprised to discover that while these cells did, in fact, encode signals contained within the blood related to hydration just as had been predicted, they also received two other signals related to thirst that operate on a much faster timescale. The first of these two fast signals encoded the volume of liquid the mouse had drunk, regardless of what the liquid was. Every time the mouse licked liquid from a dropper — whether it contained silicone oil, salt water, or some other liquid — the thirst neurons would become less active. This signal, which was relayed to the brain from neurons in the mouth and throat almost instantaneously, was interesting because it only detailed that something was drunk, not whether or not it was thirst-quenching. “That raises the question of where in the body the nervous system is able to monitor what you actually drank,” says Zimmerman. The second fast signal seemed to fit this bill — it was slightly slower than the first fast signal and appeared to convey information from the stomach and intestine that encodes the osmolarity of what the mouse drank. This corrective gut-to-brain signal was a fast, direct readout of whether or not the mouse drank water, and could override the throat signal if the animal did not.

Zimmerman’s findings offered an updated, more accurate model of how thirst is controlled by the brain. “The old model focused exclusively on bloodborne signals that represent your body’s current hydration level,” says Zimmerman. “Our new model adds layers of ‘anticipatory’ signals that arise throughout the body and enable the thirst system to predict how drinking and eating will affect your hydration level in the future.” Zimmerman’s new model is particularly exciting because it explains aspects of behavior that were previously unclear, such as why thirst satiates so quickly after water is consumed, and why cold water is more thirst-quenching than warm water — “elements of everyday behavior that had puzzled neuroscientists and physiologists for decades,” says Zimmerman.

For his postdoctoral research, Zimmerman hopes to merge his interests in signals that arise within the body with the unique assets available at PNI. His PhD work illustrated how just a few cells in a single brain region can be intimately associated with behavior, “but most of our behavior is more complex than that, often involving sensory and cognitive processes that span the entire brain,” says Zimmerman. The cutting-edge resources at PNI allow Zimmerman the opportunity to perform massive neural recordings from across the brain to understand where behaviorally relevant signals from within the body are represented, and how they can be used for decision-making and learning. “Internal sensations inform the brain about the intricate physiological state within our bodies, but we’re only beginning to understand how the brain uses this information during most behaviors or during learning,” says Zimmerman.